Your Target Audience Made Easy 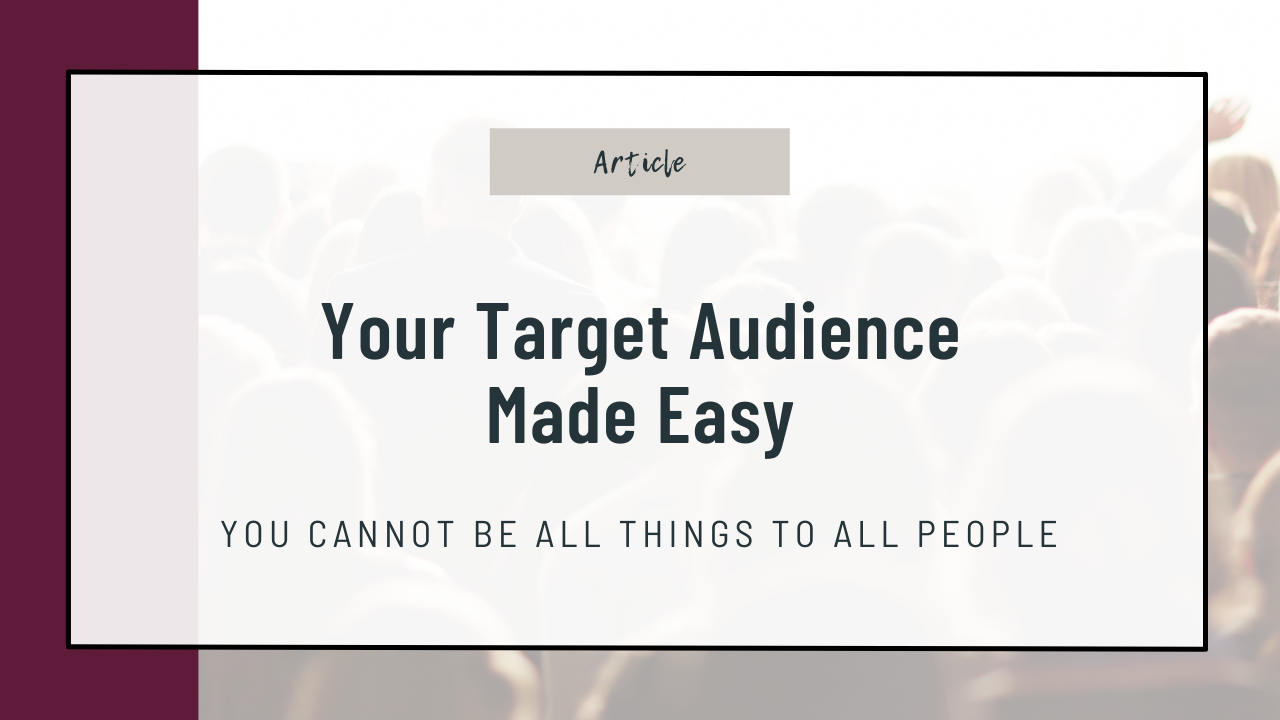 Target audience is another one of those buzzwords I hear thrown around by experts a lot. I understand the concept and even why it’s crucial to the success of your business. We cannot be all things to all people, so which people should we be focusing on?

Sometimes I think hard-core defining of fluid and emotional things is more challenging for creative-minded people. At least, it was for me.

I tend to be a perfectionist (I’m working on that), so when people give me a task, I want to excel. Time and again I’ve heard that defining your target audience is about listing his or her traits right down to her favorite cocktail. I am sure this works great for some people, but it left me thinking, “How am I supposed to know what some random girl likes to drink after a stressful day? Sheesh.”

I’ve made a ton of lists and assigned a lot of character traits, but nothing ever felt right. I knew my why, but how was I going to figure out who to help? I wanted just to say ‘women,’ but apparently, that is too broad a category. Inevitably, someone would ask, “Which women?”

Listen, I can do details, I just prefer more 30,000-foot thinking. I found drilling down into the psyche of an imaginary woman tedious. I also never felt like it was a useful exercise because I was never able to apply the information practically. If I’m honest, my inability to figure out my target audience made me feel like I was failing.

UNABLE TO GET A SOLID GRASP ON WHO I WAS SERVING, I EMPLOYED MY NEXT BEST STRATEGY — WINGING IT.

What could go wrong? The trouble with the winging it approach is you are all over the place. It’s like throwing cooked spaghetti at a wall to see if it sticks, thus indicating that it’s done. I was throwing a lot of stuff out there to various women and trying to see if anything was sticking. Once in a while, I’d get lucky, but there was no pattern, so I struggled to recreate the thing that worked.

It looked like I was going to miss the target forever.

It all finally clicked for me when I was watching a free training video from Amber Lilystrom. She is a branding expert, and she’s utterly precious. You should check her out. Anyway, I loved her take on figuring out your target audience.

Because I know what kind of drink she likes after a hard day. I know her fears, her dreams, her struggles, and her efforts. I KNOW HER.

It’s like asking someone, “What would you tell a younger you about your life?”

I know the answer to this one! I’d tell her to find Jesus quicker, don’t believe everything other people say about her, and try to start working out when you’re younger.

I can lead a younger version of myself through the murky water because I’ve already been there done that. It excites me to think I can love on and encourage someone in the way I wish I would have had love and encouragement through my journey.

My target audience has never been more precise.

Think about your why (if you aren’t sure of that, see this post) and then think about what you would say to a younger version of yourself.

THIS IS YOUR OPPORTUNITY TO OFFER HER THE THING YOU WISH SOMEONE HAD OFFERED YOU.

It turns out discovering my target audience isn’t complicated at all. It’s not about being creative or analytical. It’s about overcoming a hurdle that leads to your passion and work, then turning around and offering a hand to the girl coming up behind you. All you have to do now is tell her, “Every thing’s going to be okay.”