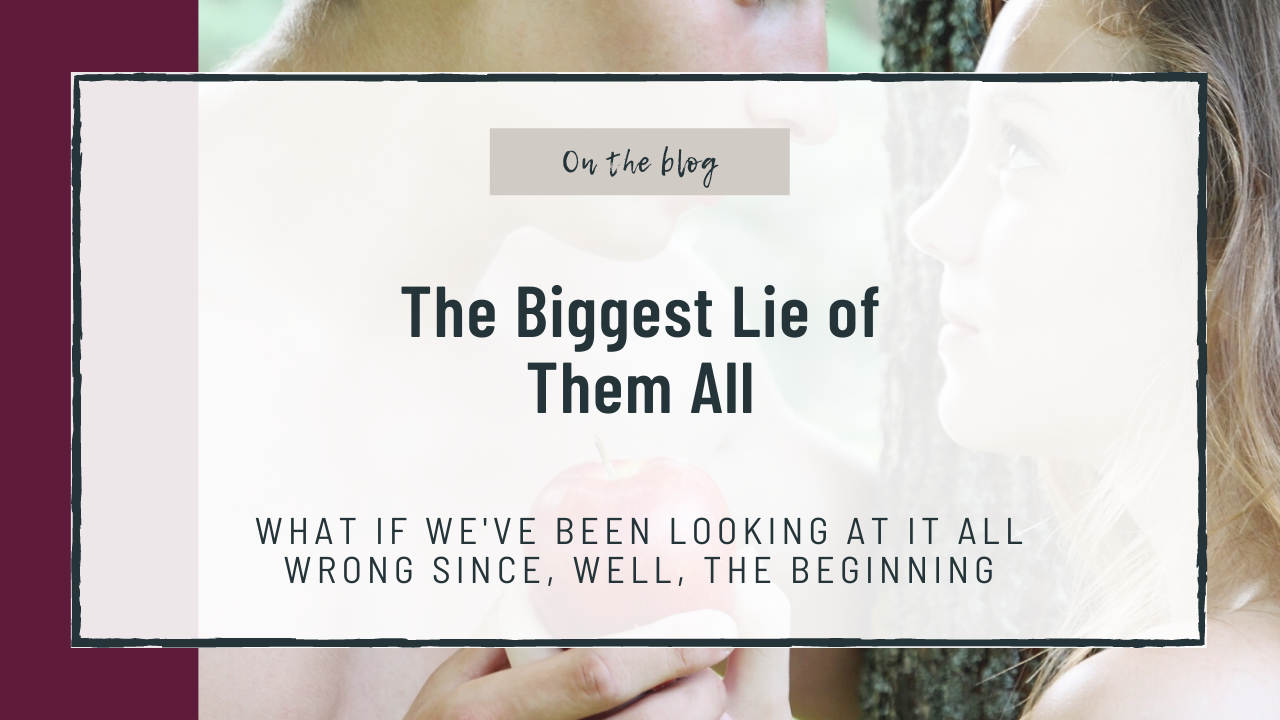 Right off the bat, I need to be clear that I am not a theologian. In fact, I’m relatively certain biblical scholars would argue with me over this idea, and if I were in a fighting mood, we’d end up in a scripture battle I would expect to lose.

Regardless, I still can’t help but ponder this very big, possibly world-changing question.

In the Garden of Eden, why did the serpent choose Eve?

Traditional thinking since the advent of this story has been the serpent chose Eve because she was the weaker of the two humans. Therefore, she would be easy to manipulate. He’d lie. She’d believe. The whole thing would be over by lunch.

We pay very little attention to Adam or his role in this debacle. I mean, where was he? As the stronger sex, you’d think he would have defended Eve’s honor, or at least reminded her of the command NOT to eat from the forbidden tree. What we know for sure is that Adam did not protect Eve from the devil.

It may also be worth noting that when God created Eve, he used one of Adam’s bones. The man was down a bone! Wouldn’t that make him weaker on some level? And to avoid man-bashing, we won’t even go into how God found them in the Garden after the fateful fruit caper and Adam explained by saying he was afraid. Then he blamed the woman. Eve just owned it.

“The serpent deceived me, and I ate,” she said.

NO GROVELING, BLAME-SHIFTING, OR FEAR-BASED CONFESSIONS HERE. EVE DIDN’T TRY TO CONFUSE GOD WITH A LOT OF WORDS, MAKE EXCUSES, OR CLAIM IGNORANCE. SHE CONFESSED BOLDLY, READY TO DEAL WITH THE CONSEQUENCES.

I can’t help but wonder if by throwing Eve under the bus, Adam hoped God would say, “Oh, you poor, sweet, innocent man,” and let him off the hook. How’d that work out for ya, Adam?

Anyway, the question women need to ask now is, what if the traditional thinking about this story was, in fact, wrong?

Imagine if you will, that you have a guilt-free opportunity to end crime. You must pick one target between a mafia crime boss and his right-hand man. Which one do you choose? The logical choice (in this illogical argument) is the crime boss. Why? Because it would make a more significant impact.

If you take out the leader, the organization falls apart. Sadly, the right-hand man can be easily replaced and may not even disrupt the business of crime. It’s a far better option to focus on the lead guy.

So, back to Eve. Why, when the serpent looked upon the two humans, did he select Eve as his target?

What if it was because she was the stronger of the two, rather than the weakest?

Consider the position of the fallen angel. He will stop at nothing to oppose God. That’s kind of his thing. He’s looking for victory in the battle of good vs. evil and the bigger the kill, the more partying he will do that night.

It seems to me that if I had been the snake choosing my target, I’d go for the one that gave me a bigger bang for my buck. I’d pick the one with the most influence. I’d pick the leader. I’d pick the stronger of the two, so I could be one and done. Plan B would be to tempt the other guy.

The question is, what did he see when he looked at Eve?

I look around at the women I am surrounded by, and I see them doing the cooking, cleaning, planning, laundry, bathing, registering of kids, planning meals for events and sick friends, volunteering, working (full time, part-time, or mom time), being excellent wives, moms, and friends and so much more. I see them getting the family to church on Sunday’s.

Never mind the hidden things she does, like dealing with the repairman, remember everyone’s birthdays, change sheets, notice a kid is outgrowing shoes and making a plan to get the next size.

I am not trying to dog men when I say that I don’t see them doing half of that stuff. It’s merely an observation. Women never stop, not even when they are sick.

WOMEN ARE SILENTLY RUNNING THE WORLD, EXHAUSTED BY IT, AND FOR SOME GOD-FORSAKEN REASON, ARE STILL UNDER THE BELIEF THAT THEY ARE THE WEAKER SEX.

As I ponder the women of the Bible, it’s not hard to call to mind multiple women who demonstrated strength.

Mary, the engaged, teenage virgin, gave birth to the savior of the world while hanging on to her fiancé, helping Elizabeth with her pregnancy, and oh yes, traveling for days, nine months pregnant on the back of a donkey. Then, denied any creature comforts at all, this warrior of a woman gave birth in a stable.

Esther saved her entire country after being orphaned, sold to a harem, married at 14 years old, and risking her life to approach the king.

Abigail saved her entire household after her husband made an enemy of David, the future king. Using wisdom, humility, and generosity, she stopped what would have been a massacre. She made such an impression on David that after her husband died, she married the king.

Rahab was a prostitute who hid the good guys despite the terrible risk. Because of her belief, she saved her family when Israel claimed the land of milk and honey and ended up being in the family line of Jesus.

The woman with the issue of blood had been searching for an answer for over a decade. Many would have given up, but she had such faith in the power of Jesus that she fought through a crowd of people grossed out by her simply to touch the hem of his robe.

Take Ruth, the woman who married a foreigner and after he died, wouldn’t leave her mother-in-law’s side. She refused to abandon her mom-in-law, aware she’d be leaving the only home she had ever known. She followed her husband’s mother out of one life and into another, all because she wouldn’t leave an older woman to die alone.

The woman at the well had gone through 5 husbands and was living with another man. She was so ashamed of herself that she would only go to the water well when no one else is there. But after she met Jesus, she forgot about the hurtful words and the painful judgments hurled at her by the townspeople. She ran into Samaria and told everyone the Messiah had come, making her the first evangelist in history.

The disciples knew Jesus was going to die, and they swore they would go with him even unto death. But after his arrest, they scattered. To make matters worse, Jesus actually looked Peter in the eye as Peter denied him for the predicted third time.

Yet, scripture tells us that throughout the ordeal of Jesus, the women stayed. They not only never left him, but they also made all of the arrangements for his tomb and how they would prepare the body for burial.

I’ve noticed throughout gospels that the names of the women change in the stories of the apostles. But it makes perfect sense to me that Joanna was there but had to leave to get everyone’s kid’s dinner before coming back. They took turns taking care of Jesus and their households simultaneously.

Then, on the third day, Mary walked to the tomb where Jesus lay. To her great surprise, rather than finding his lifeless body, Jesus had risen from the dead and greeted her. You would think the savior who conquered death could appear at any location he wanted. With a snap of his fingers, Jesus could be in the upper room with the disciples, but instead, he chose to wait for Mary. He instructed her to run to tell the disciples about him, and when she immediately obeyed, she became the first post-resurrection evangelist in the history of time.

Except I don’t read a single one of these events and determine women to be in anyway less-than men. I am in awe of their strength and power and grit. There isn’t a weak one among them!

JESUS CLEARLY HELD WOMEN IN HIGH ESTEEM. THEY FINANCED HIS MINISTRY, THEY SAT AT HIS FEET, CARED FOR HIM AT HIS WORST, AND TOLD ANYONE WHO WOULD LISTEN ABOUT THE MAGNETIC POWER OF GOD.

For over two-thousand years, women have downplayed their God-given strength, because we have all assumed, myself included, that because the mother of creation had a weak moment, we must all be weak for the rest of eternity.

What a crock of donkey dung.

So why did the serpent target the woman in the Garden?

What if it was because she was strong and powerful and influential? I mean, she got Adam to eat the fruit, too, didn’t she? What a win this has been for his slimy butt.

And yet, God stands nearby, vowing to win us all back to him. Writing the Bible to us like a love letter of his determination to help us, at the end of the day, be the real victors. Even now, with our magnified sin, selfishness, and twisted understanding of who he is, he never leaves us. We’ve screwed it up good, but he still calls us beautiful. He calls us his masterpiece. He always makes plans for us and equips us to run the race set before us.

For women, it doesn’t matter how weary we get. Women press on in life, no matter what gets thrown at them. And they do it looking beautiful while raising kids and taking care of the world. Women ooze kindness, wisdom, and sometimes, a lot of sass. But we get the job done.

IN THE BEGINNING, GOD CREATED THEM IN HIS IMAGE. HE NEVER SAID SHE WAS WEAKER. NOT ONCE.

I give Eve a lot of grace, though. She was a pawn in a war started by someone else.

Where Eve truly messed it all up, was that she didn’t check the facts. She got secondhand information about what to eat and what not to eat, and she believed. Eve failed the test. I sure hope she learned to get her information verified from that point on.

So isn’t it curious that although God never called us weak, we’ve believed it for centuries like it was (forgive the pun) gospel truth? But what if it was never anything more than secondhand information? I’m checking the facts and I from where I am sitting, women are the furthest thing from weak.

WOMEN ARE THE MOST BADASS CREATION IN ALL THE WORLD.

Genesis 1:27 – 2:3 says that God made man and woman in his image, then he rested. It took a lot out of him to create something as powerful as humans, and as fabulous as women! I don’t blame him one second for resting. The artist always puts down his paintbrush when the masterpiece is complete.