Stop Trying to Be Successful 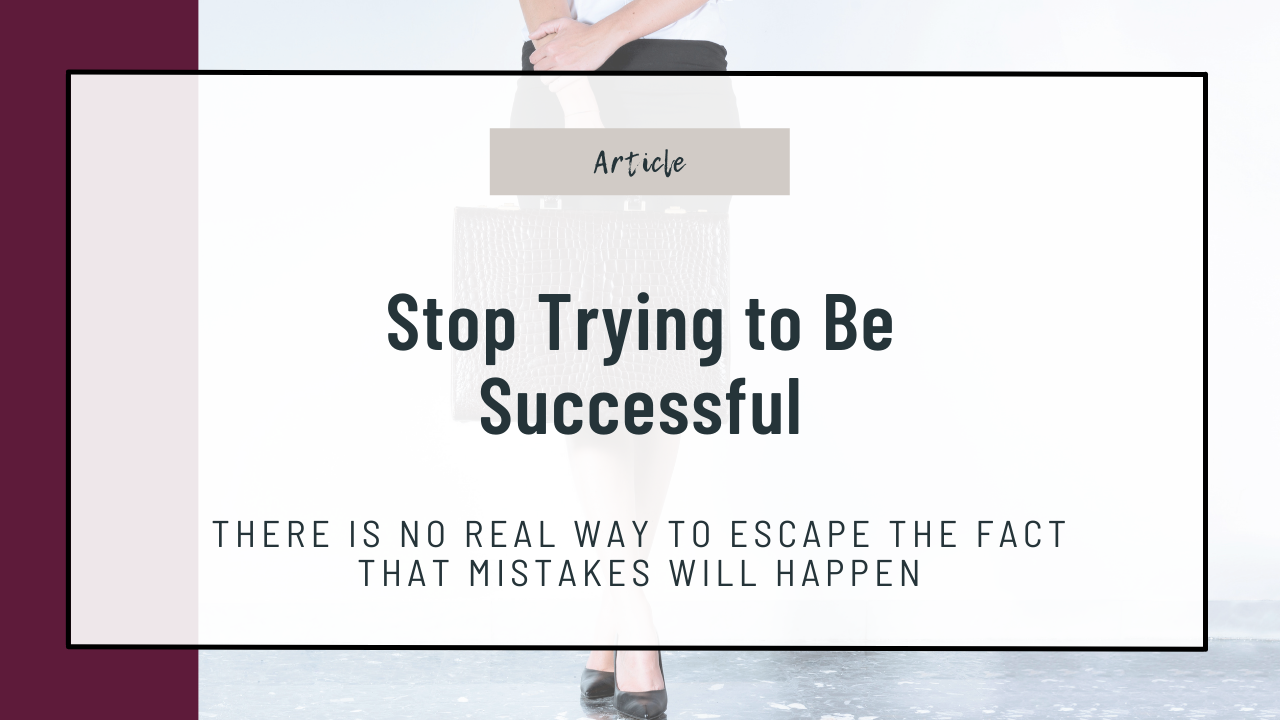 I’m a girl who does her research.

I listen to podcasts, read books, watch YouTube videos, subscribe to newsletters and magazines, and pick the brains of experts in the field. I do it partly because I enjoy it, but also because I am hoping to avoid the mistakes of those who have gone before me.

I WANT TO LEARN HOW NOT TO MESS IT ALL UP.

Time and again, however, I hear the experts talk about the things they wish they had known, things they would do differently, mistakes they learned from, and on and on.

It seems like there is no real way to escape the fact that mistakes will happen.

There are two ways to approach mistake-making. The first is to over-prepare, like me, which seems like a reasonable strategy for anyone with control issues. The problem with this method is that, like fingerprints, no two people on earth are the same. Because of these variations in philosophy, there will never be one right way to tackle an issue. The nuances of personality, style, and ideas invariably mean that what worked for one person won’t necessarily work for you.

The second approach to mistake avoidance is procrastination. It’s some psychological version of “If I haven’t done it yet, I haven’t messed up.” The trouble with delaying the work is that the work never gets done!

IT’S NOT ABOUT PERFECTIONISM. IT’S KNOWING AT THE END OF THE DAY WHEN YOU SET OUT TO CHANGE THE WORLD WITH YOUR MISSION OR MESSAGE, YOU’RE GONNA SUCK ON SOME LEVEL.

What would it look like for you if you decided to be okay with that?

Documentary filmmaker, Ryan Leak, decided to stop trying to achieve things and to chase failure instead. His idea was to work toward something that seemed impossible and see how far he would get. Ryan decided to try out for a professional basketball team, knowing his chances were slim. Still, he trained like a pro athlete, practiced and asked every coach in the league to give him a tryout. One coach did. He put the whole thing on video. Spoiler alert: he didn’t make the team.

What is so compelling about Ryan’s story isn’t that he tried out for something he knew he wouldn’t work out. It’s all the little successes that came with every step he took toward his goal.

“Chasing failure took me further than chasing success ever did.”

If there is no possible way to avoid making mistakes, why are we still holding back as if there is some magical, perfect way to do things? I would even argue that anyone who isn’t making mistakes isn’t taking enough risks.

Then one day, you’ll be leading a room full of hopefuls, eager to avoid mistakes, and you can encourage them with your story of how chasing failure was the very thing that led to your success.