Letting People Should On You

believe in yourself love yourself should on use your skill Mar 05, 2019 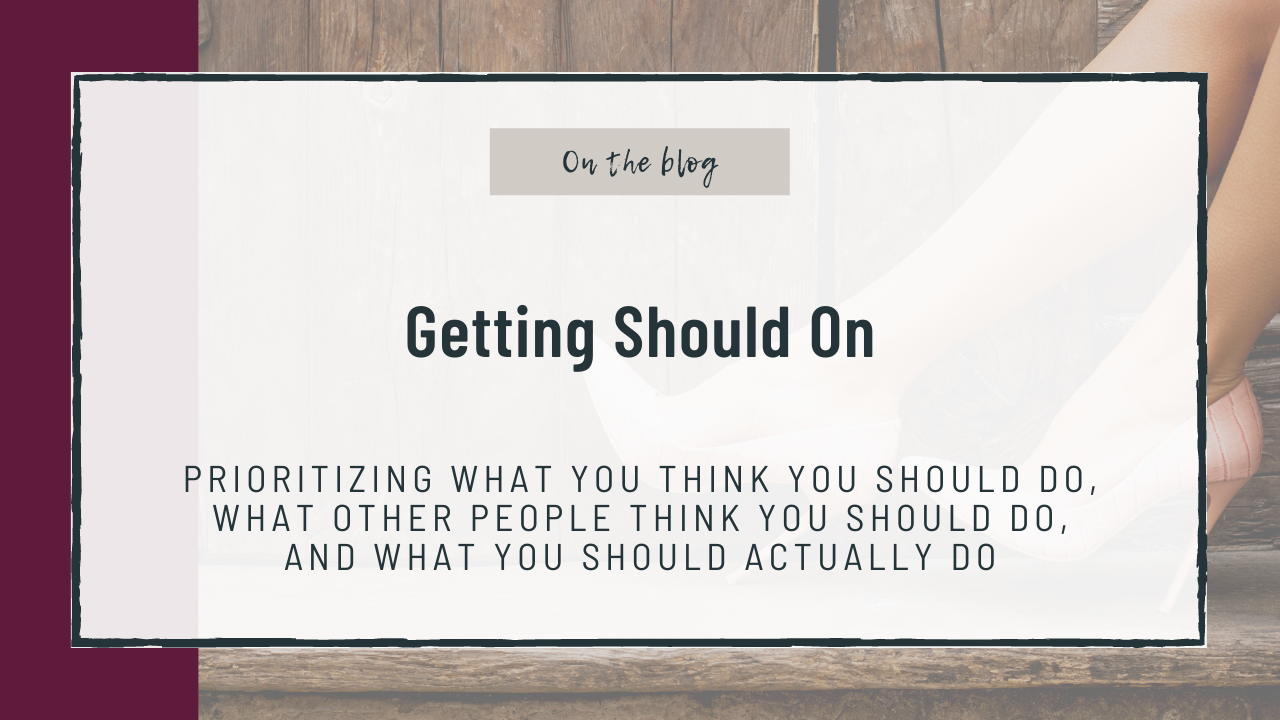 If you’ve spent any time around me, you’ve probably heard one of my Anne-isms.

I HATE TO GET SHOULD ON.

I giggle just thinking about it because I love the play on words and it’s fun to say. It’s also true. But I didn’t know that at first.

I’ve spent a lot of my life trying to stuff myself into someone else’s opinion box. I was driven by things like, “You should always be…,” or “You should never do…,” and like a good girl, I obeyed.

I was having coffee one day with a friend, recounting the latest story of how my feelings were not in line with my actions. (This is a common problem when you aren't true to yourself.) Whenever I shared stories about my struggles, I was always ready to apologize for being wrong. I did this to avoid criticism because it seemed to keep people from laying into me about how I was wrong again.

“This situation made me feel like this and I can’t seem to get over it. I know I should I let go and let God, but even when I try, the feelings still stay.”

Calmly and without much ado, she merely said, “I hate to get should on.”

She went on to explain that way too many people get wrapped up in what other people think we should do, and be, and feel. When we do that, when we try to conform, we steal little pieces of who we are and give them away to people who will never care about them. Not only that, those losses add up until they equal one, big, fat, lost identity.

Did you hear the whooshing sound of your identity flying away? Neither did I.

I began to pay attention to the number of times per day I think about what I should be doing and whether or not it’s for the sake of someone who isn’t me. Y’all, I don’t think I can count that high. Each time I ‘should-ed,’ woke me up a little more. Now I’m fully awake.

It’s not that I never do what I should now. It’s more like I am pickier about the things I allow to be a ‘should.’ For example, I should make plans with the family for my son’s birthday celebration next week. I should not feel obligated to make it a great party for anyone but my son. I should work on the project I said I would take care of, but I should not kill myself making it perfect when good enough will be just fine.

See how this works?

Take a few moments and think about the last time you got should on. How did it make you feel? Were you excited about it because it’s in line with who you are, or were you dreading it because you’re only doing it because you’d feel guilty if you didn’t? I think you can figure out which one to dump. If not, email me and let’s talk.

I’VE LEARNED THAT ONE OF THE KEYS TO LEARNING TO LOVE MYSELF IS TO GIVE MYSELF PERMISSION TO STOP BEING SHOULD ON. I’M SICK AND TIRED OF LETTING OTHER PEOPLE TELL ME WHAT I SHOULD BE. THAT’S NOT HOW IT’S GOING TO BE ANYMORE.

It shouldn’t be that way for you, either. Yeah, I ‘should-ed’ on you. Now you decide if you are going to own it or not. It’s your choice.

NEXT WEEK, I WANT TO TALK ABOUT HOW TO STOP LIVING FOR THE DIS-APPROVAL OF OTHERS, EVEN THE ONES WHOSE APPROVAL YOU WANT MOST IN LIFE. I MADE SOME TOUGH DECISIONS, BUT IT WAS WORTH IT.

What are your thoughts on being ‘should’ on? Have you seen this play out in your life or the life of someone you love? What have you tried that works?