Failure is Fake (+ a Worksheet)

love yourself no such thing as failure strong women Feb 12, 2019 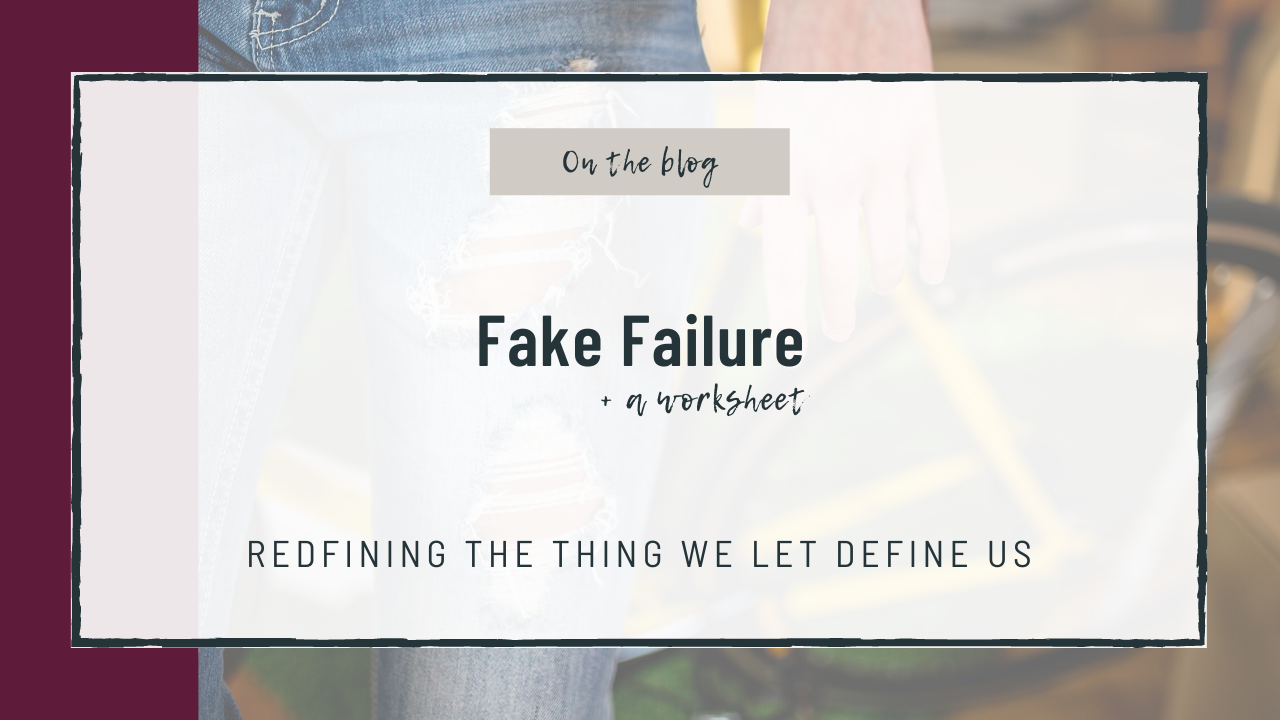 What if I told you there was no such thing as failure?

FAILURE IS ACTUALLY A MERMAID, A UNICORN, OR THE PROVERBIAL POT OF GOLD AT THE END OF THE RAINBOW. FAILURE IS INVISIBLE, IT HAS NO ACTUAL SUBSTANCE, AND IT’S EVIDENCE OF NOTHING. YET, YOU AND I PUT TONS OF WEIGHT ON FAILURE.

We treat it like it’s our boss, our handicap, our extra weight, our drill sergeant, our measuring stick, or our resume. We have somehow turned failure into a living, breathing thing that has an opinion we value.

Excuse me, but WTH?

I supposed it’s like money or food. Because they are tied to emotions, we think they have a form of control over us. But the deal is that money is just money. Food is just food. They aren’t good or bad.  They don’t have inherent characteristics or emotions or control issues. They just are.

So why are we projecting our value onto these things like our lives depend on it? Are we really waiting for failure to say, “You suck, but good job.” Are we waiting for money to tell us it’s going to reproduce itself, so our debt goes away? Are we waiting for food to whisper, “I’m sorry. I had an evil plan to make you fat this whole time. But I’ve repented and changed my ways.”

So, if money and food are false measures of how we are doing, why would failure be any different? I wondered about this one morning and decided to dig around this idea for a minute. I grabbed a sheet of paper and made two lists. One side was ‘Limiting Beliefs’ (like a failure), and the other side was ‘Truth.’ Then I started making lists. Let me show you:

I am willing to try anything.

I’ve learned so much.

Created by God on this one. For a reason.

I fail at everything.

I’ve messed up too much.

I am too much.

You get the idea. But just in case you need another example, let me give you a short story.

After experiencing yet another failure in my life, I was complaining to my Aunt. Typically, she is a ‘fix it’ Aunt, but in this particular conversation, she shocked me when she said, “You know what I’ve always admired about you? That no matter how hard something is, you never give up.”

One of the examples she gave me was from when I was a sophomore cheerleader in high school. Kids are mean, and I was bullied relentlessly by my peers. We tried out for cheer every year and that year I got cut. I was flabbergasted because even in my fifteen-year-old state, I knew there was something not right about what happened. My mom called the cheer coach and was told, “She wasn’t loud enough in her tryout.” Can I just tell you that was total B.S.? I was loud enough, I just wasn’t accepted enough.

Still, I loved cheerleading. I loved wearing the uniform and Friday night lights. So when cheer tryouts came round again, I went for it. And I was plenty loud. There was no way they were going to cut me again on a technicality. (The liars.)

I made the squad once again.

Full disclosure: it was a year from hell. If I had it to do over, I wouldn’t, but for years I carried it around with me like it had power. I was bullied. I was cut. I shouldn’t have tried out again.

I SPENT A LOT OF TIME BLAMING MYSELF AND ASSIGNING MYSELF CHARACTERISTICS INSTEAD OF CIRCUMSTANCES.

Then my Aunt blew me away because when she looked at the situation, she saw that I was brave, strong, and had a never-give-up attitude.

WHAT I SAW AS A FAILURE, SHE SAW AS A STRENGTH.

That was a powerful lesson for me, but I will admit it took many years of undoing the experiences I turned into beliefs. The thing is, one day I did undo them. It was a process, and in some ways, it’s still going on, but I found a way.

I want to challenge you to make a list like I did. I’ll give you a worksheet to help you. On one side, write down all of your limiting beliefs. On the other side, refute it. Take as long as you need, but the most important thing you can do is admit the truth.

YEAH, I KNOW YOU. THERE WILL BE EXCUSES, EXTRAORDINARY CIRCUMSTANCES, SITUATIONS I DON’T KNOW ABOUT, BLAH, BLAH, BLAH. DO IT ANYWAY. TRUST ME.

This isn’t a cure-all. Lord if it were, I’d be a millionaire. It’s merely a tool to help you begin to see that failure does not mean what you think it means. It’s redefining (and redeeming) the stories you tell yourself about who you think you are.

Spoiler alert: you are more than you think, you’ve accomplished more than you believe, you are stronger than you give yourself credit for, and you are fully capable of moving past this B.S.