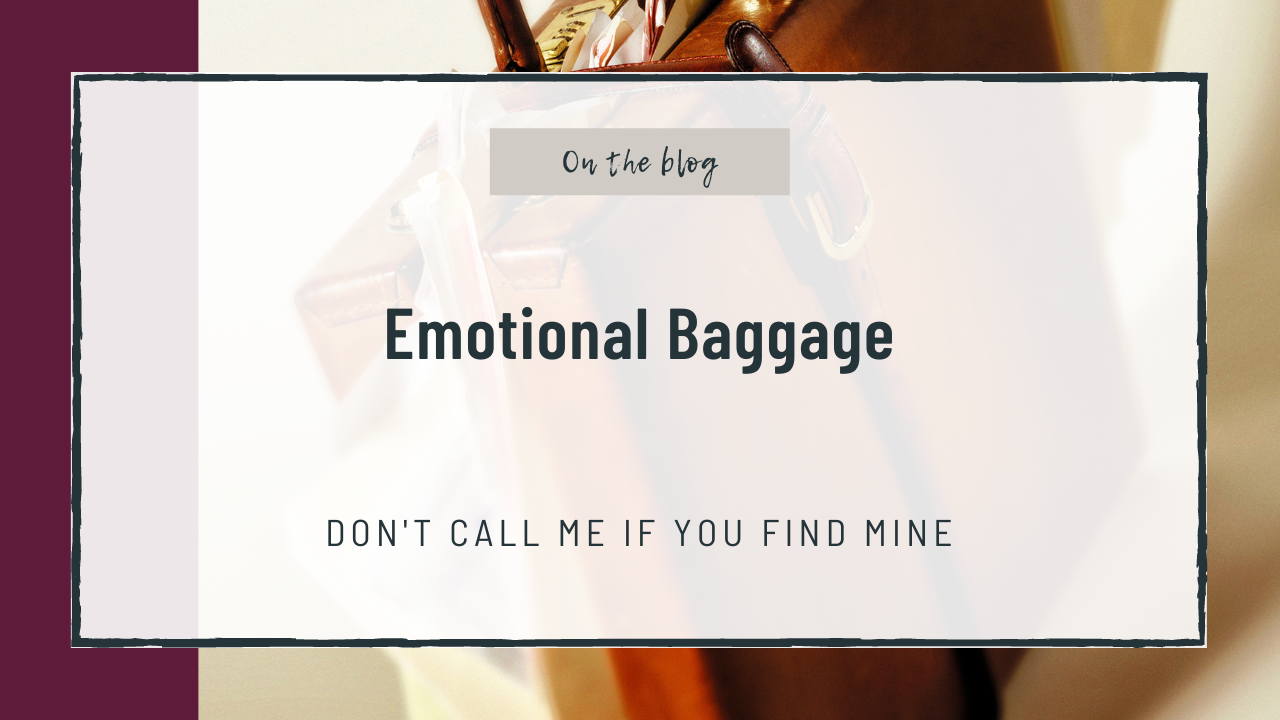 So here’s (some of) the baggage. I was bullied pretty severely in high school. 10th grade. These days it would be the type of story to end up on 20/20 or Dateline. It was so bad that I had plastic surgery when I was just 15 years old.

My mom used to say, “Kill them with kindness.” She rationalized that nice people don’t get picked on. It would be years later that she would retract this well-intended advice and confess that she wished she had just taught me the middle finger, instead.

I wish she had, too.

Being nice to my bullies just made what they were doing ok. I was kind of a doormat.  My dear friend, Wendy, says that you teach people how to treat you. I see now how right she is. I taught them that it was okay to treat me that way by allowing it. So that’s my fault. But there is blame to go around.

This extreme bullying ultimately led me to a life of extreme people pleasing. It makes sense, right? If I could just be nice enough, good enough, funny enough…people would like me. The exact opposite of bullying.  The problem with that approach was over time I became more and more convinced that I was not good enough, funny enough, pretty enough, smart enough…you get the picture.

Somewhere in my mind I knew this wasn’t rational but I had gotten so deep in the insecurity that I was fully defined by what others thought. I didn’t think they thought much of me. How could they when I didn’t think much of myself? I became an amazing architect, building my insecurity prison. It almost felt safe there, too.

When I began a relationship with God I started to see some of these well-built lies unravel. The more I knew God, the more I learned about myself. I could cry for all the “I wish I had known…” moments now. I really could just cry.

These days I feel like I have overcome this terrible bullying. I have raised my fist and yelled, “No more! This is NOT okay. Not on my watch!” I’ve pretty much convinced others and myself that I am confident and capable. God made me that way. I’m good now. Move on, thanks for coming.

But there are triggers. Dang it.

I just figured this out. I don’t yet know what they are but somewhere in the deepest places of my soul is that hurt little girl and she still feels picked on.  Something will happen and I become the old version of me that I want to punch in the face. I fall into an internal battle over my own worthiness. There’s pressure in my chest and tears in my eyes. I tell myself I don’t belong and my thoughts spin like a tornado from there. A whirling dervish of truth derailment.

Then I am angry with myself. Because I know better.

I chalk it up to decades of insecurity training. I have a bad thought habit. I may need rehab. Then it hits me…

I HAVE BECOME MY OWN BULLY.

To borrow some lyrics from Eminem, “I’m friend’s with the monster that’s under my bed. I get along with the voices inside of my head.” That rapper is profound sometimes.

Why am I telling you all of this now? I have a beautiful 15-year-old daughter. Lately, we spend our nights crying because of the bullying behaviors of a few mean girls. And she is starting to buy the lies. She is starting to agree with them. She is becoming friends with the monster under the bed.

“We demolish arguments and every pretension that sets itself up against the knowledge of God, and we take captive every thought and make it obedient to Christ.” 2 Corinthians 10:5

It is critical that I form a new habit now. I have to take these bullying thoughts captive in my mind and replace them with the truth about who I am in Christ. If I don’t, I will never accomplish the true purpose that God has for me. If I don’t, my daughter will have no choice but to continue down the same path. I have to lead her.

I have so much hope! I am so wrecked by God now. I am destroyed and re-built. I am an overcomer! God has pulled me out of my pit of despair and held me tight. He whispers to me that I’m beautiful and wonderful and His. I am really working hard to believe Him. It’s gonna happen.

She’s gonna believe Him, too.

It’s time to throw the baggage out the window and give the monster under the bed the middle finger.