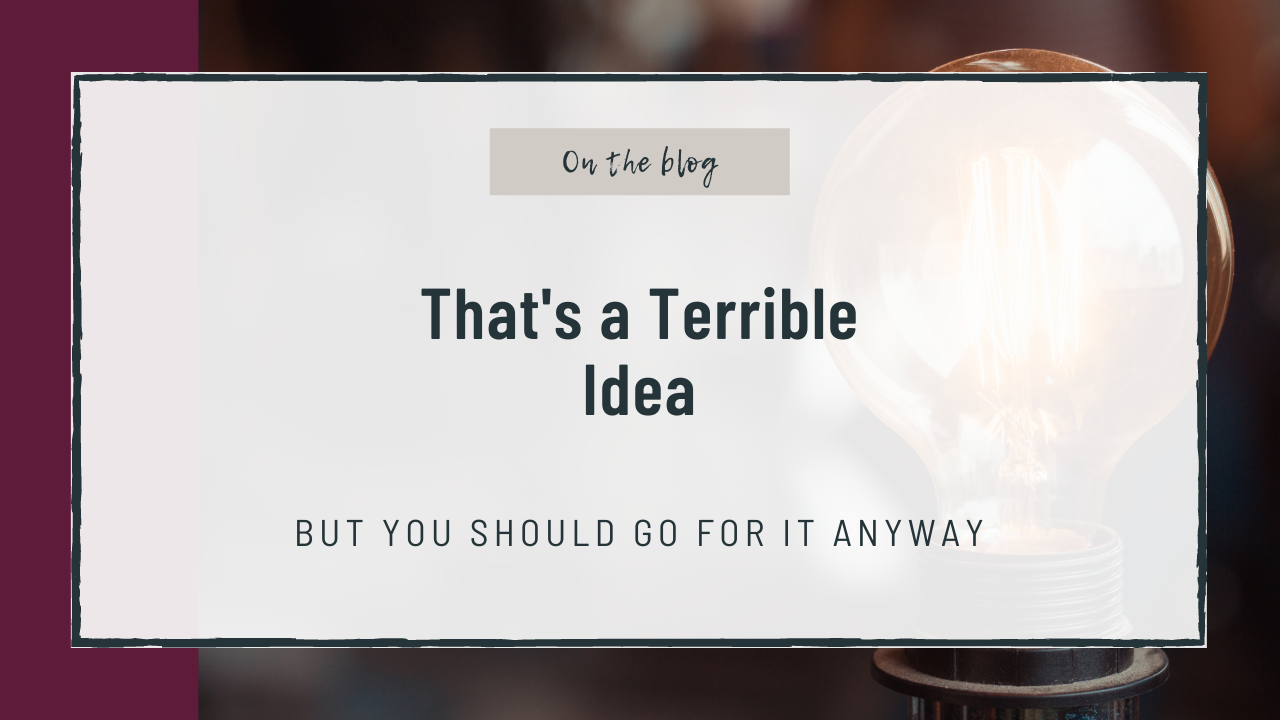 I love the movie, “Under The Tuscan Sun” with Diane Lane. She is a writer who often has to deal with writers block or writer’s self-loathing. (Anyone? Anyone?) In the beginning, she advises a student to take an idea he considers terrible and work on it. Ultimately, his terrible idea turns into a published book.

I often think about this scene, especially when I am trying to write. It’s pretty easy for me to convince myself, “That’s a terrible idea.” But lately I have been wondering…what if it isn’t such a terrible idea?

What if the real terrible idea is not to try?

I have great potential to stay stuck in my life. Right where I am, doing just what I am doing. Never growing. Never moving. Never changing. I sometimes lack motivation and I am an expert procrastinator. I could give you tips on putting off good things.

Fear that putting myself out there will somehow hurt.

Talk about a terrible idea. Letting fear rule me. God says umpteen million times in the bible (you can quote my number there) “Do NOT fear.” And as far as I can tell, he never once says to a human, “That’s a terrible idea.”

In fact, God calls more people in the bible to take risks than I can count. The obvious question is, “Why?” I mean, why would He call people He loves to take crazy, insane risks? (i.e., Moses to Pharaoh, Esther to the King, Joshua to the wall of Jericho, etc.)

I think the answer is found in Isaiah 41:10, on of my all time favorite verses.

“So do not fear, for I am with you; do not be dismayed, for I am your God. I will strengthen you and help you; I will uphold you with my righteous right hand.”

I don’t know about you but I get excited when I read that. God is WITH me. And if God is with me, I can’t fail. Even if I fail, I can’t really fail. There is nothing that God can’t use or redeem. So my fear is pointless.

The real risk is letting my fear keep me from turning terrible ideas into great ones.

In the movie, “Under The Tuscan Sun,” Diane Lane’s character is asked if she is going to buy a villa in Italy. She responds that it would be a terrible idea.  I love the response of the ice-cream eating woman she is talking to.

I do. I’m a fan of terrible ideas. I want to go for it. I want to take a risk. I want to live life fuller. I want to risk failure for the sake of greatness. I want my kids to see me take risks and sometimes fail and sometimes win. Life is meant to be lived! Not procrastinated.

Diane Lane’s character gets over herself and her fear, buys the villa and let’s her life unfold. I know it’s fiction but I like to think that God was involved. In fact, I’m sure He was because that fiction story moves me and inspires me. In fact, maybe one day I’ll buy a villa in Italy. But for today, I might just try working on a terrible idea.

What terrible ideas are you working on?